There are a few things we wanted to add or change on the van, and then we'll be finished!

There is a lot of road noise in the cab of the Sprinter, and the stock speakers sound pretty bad when theyre turned up to combat the noise. The actual head unit is integrated so we wanted to leave that. We bought a second hand 4 channel amp, a subwoofer, and new componant speakers for the doors / dash. The amp and subwoofer are mounted in the passenger seat, so at least one of us gets to 'feel' the bass. All up, everything cost about $280, and the sound is greatly improved. 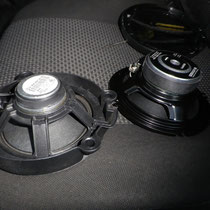 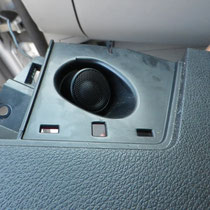 We decided that we like TV. And we don't like driving hundreds of kms to get reception from our small antenna. So we got a satellite dish. We bought it from Access Antennas, who seem good, and offer a money back guarantee if you can't lock onto the satellite within 2-3 minutes of trying. The tripod needs to be vertical, the dish elevated to the correct angle for your location, and then swivelled around to face the right way. The equipment that came with the dish makes that pretty easy, especially having witnessed others struggling with different tripods etc.

We want the dish to be packed way when not in use, and up on the roof when it is, mainly for security reasons. I have built two rails on the roof with four bolts on them to take an aluminium plate. I can get this plate completely flat by adding a washer or two on the bolts. The plate has a PVC pipe thingo sikaflexed to it to take the dish. The dish ends up being upside down which should help with it catching the wind when its up there.

We've tried it a few times and it works great. The angle of elevation that is used needs to be subtracted from 90 to give the inverted angle, and the dish faces the opposite way. We look like a luna landing vehicle when its up.

We decided to put some driving lights on the front of the van. I don't particularly like the look, but I have to admit that vehicles with them are a lot more visible on the long straight roads in the bush. We were using our headlights but kept forgetting to put them on.

The lights we chose were cheapos, but with reflectors so that they don't look dot like. They're not massively bright, but they're ok. I wired them through a relay so they come on with the ignition, and turn off when the headlights are turned on; a legal requirement in most countries. The curve on the front of the lights wasn't the same as the curve in the bumper so it was a bit limited to where they could go. I chopped a bit out of the bumper to make them fit properly.

We also chopped up our dining table up as it was too big. We kept it in the arm of the sofa and because it weighs a ton, we never got it out. It's a third smaller now, and on a swinging pedestal leg, so we can keep it up all the time, and move it about. We just lower the bed until its almost touching. The table folds in half, so can be used half size for drinks / computer etc, or opened out for meals.

Our old flyscreen was getting a bit holey, and it wasn't fine enough to stop the really small bugs. So we bought some 'no-see-um' mesh from the States, and cut it to size. The opening side has a chain sewn into the hem which connects to the magnets on the wall. A few magnets in the floor help it to seal along the bottom. Its much better than the old one. Hopefully it works!

Hopefully thats all the amendments for a while. We're pretty much set to head out towards the West coast. Details about that are here.